We have four different breeds: Nigerian Dwarf, Oberhasli, Lamancha, and Alpine. All are dairy goats, but each breed has its individual characteristics.

Here are their distinctions as defined by the American Goat Society: 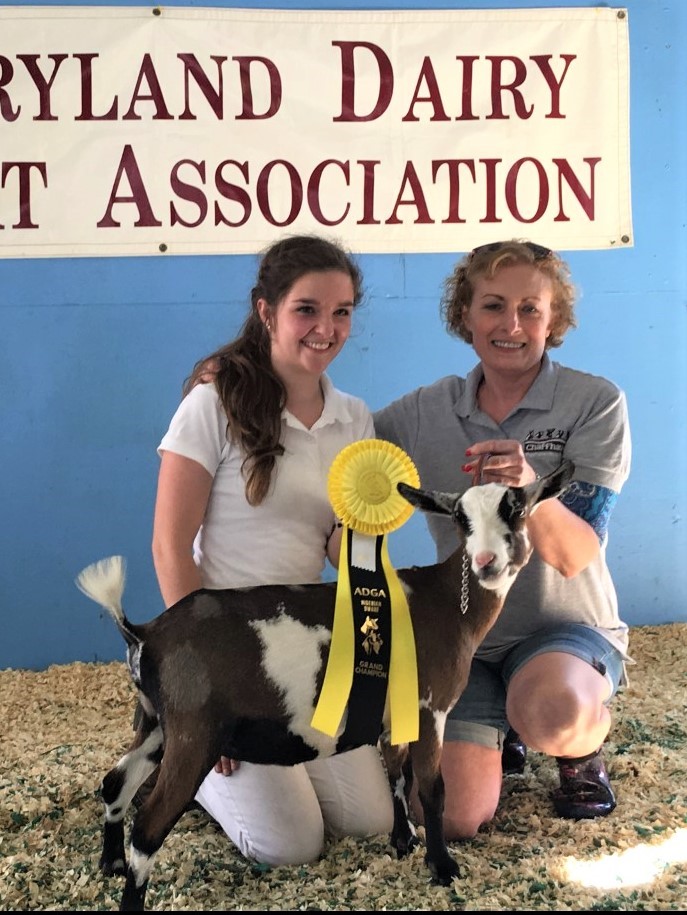 They are known for their high quality milk, often with exceptionally high butterfat content. Nigerian Dwarves are gregarious, friendly, hardy animals that thrive in almost any climate. The medium length ears are erect and alert. The face is either straight or slightly dished. The coat is of medium length, and straight. The Nigerian Dwarf is the only dairy breed known to occasionally have blue eyes. Both brown & blue eyed animals are encountered with no preference being given to either eye color. Any pattern, color, or combination of colors is acceptable.

The Oberhasli is a dairy goat found in the Brienzer region of Switzerland near Bern, where it is known as the Oberhasli-Brienzer. It was formerly called the Swiss Alpine in the USA. This breed is of medium size, vigorous and alert in appearance. It is noted for its rich red bay color and quiet, gentle temperament. The natural coat is a uniform red bay, ranging from light red bay to dark red bay; or a solid black in does. Bucks must have the red bay color to be registered.

Minimum markings in the bay Oberhasli are: two black stripes down the face from above each eye to a black muzzle; forehead nearly all black; ears black inside and bay outside; black stripe from the base of each ear coming to a point just back of the poll and continuing along the neck and back as a dorsal stripe; a black belly; black legs below the knees and hocks. The skin, including udder, is light gray to black. A few white hairs through the coat and about the ears and/or nose are permitted. Bucks often have more black on the head than does, black whiskers, and black hair along the shoulders and lower chest with a mantle of black along the back. Bucks frequently have more white hair than does.

Oberhasli heads vary with the most distinctive type being shorter in length than the other Swiss breeds. This head type has a deep jaw and broad muzzle with wide forehead and prominent eyes. The short erect ears are set low and pointed forward. The face is dished or straight. 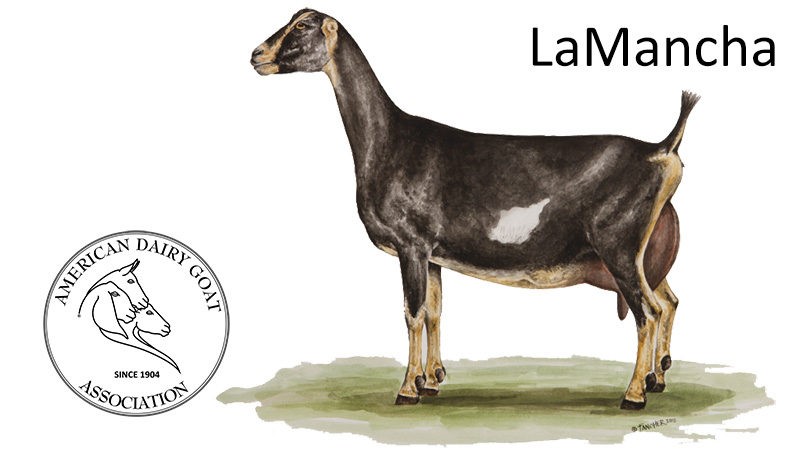 The LaMancha was developed in the USA. It has roots in Spain, but its full genetic history is somewhat obscure. LaManchas vary greatly in size, and often tend to be somewhat shorter and blockier than most other breeds of dairy goats. Taller, more refined animals are seen and are acceptable as well. They are widely respected for their docile, even temperament and steady production of milk of fairly high fat content.

The hair is short, fine and glossy. The LaMancha face is straight or slightly dished, with the ears being the distinctive breed characteristic. There are two types of LaMancha ears. “Gopher” type ears contain no cartilage but only a ring of skin around the auditory canal. “Elf” type ears contain a small amount of cartilage and a small amount of skin that may turn either up or down from the cartilage but should be no longer than two inches. One type of ear has no advantage over the other when evaluating does, however only gopher ears are acceptable on bucks. Any pattern, color, or combination of colors is acceptable.