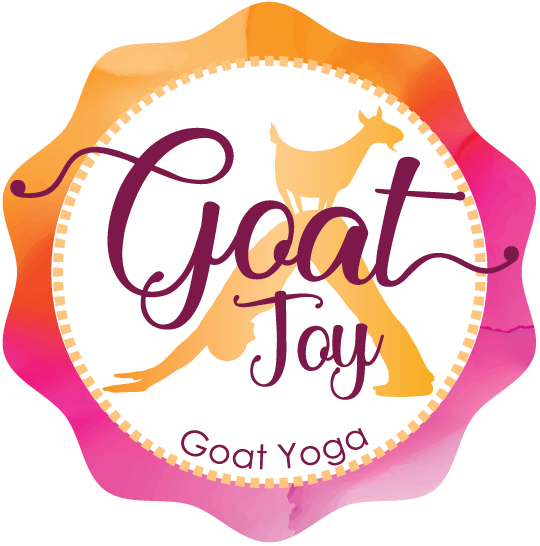 How did you get started with goats?

In 2014, Amanda brought home an FFA bottle baby goat as her Animal Science project.  He was only with us for 6 weeks before he was adopted and sent to his home.  We were heartbroken to have to let him go.  We were hooked! The baby goat was so sweet, smart, and loving that we knew we had to have goats of our own, permanently.  So, the following year, Amanda got another bottle baby and she is still here!  Sweety.

Sweety was quickly joined by several others and our addiction was fully confirmed. We began showing our first two years only at Delaware State Fair.

Why not? Goat yoga is one of the newest trends sweeping our nation.  We are the first farm to offer it in Delaware.  Our first classes were in November 2017.  They were organized as a fundraiser in conjunction with Sigma Alpha, a professional agricultural sorority, to raise money to be donated to UDance, an organization that donates all proceeds to benefit Pediatric Cancer Patients and their families.  All 3 classes sold out.  They were a great success.  So, with that under our belts, and continued demand, we decided to go for it!

We needed an instructor.  Well, an instructor found us and asked about doing classes.  Her timing was perfect!! Sue McCarthy of Lewes Yoga worked with us to set up our initial classes and Goat Joy Yoga was born.

What is the address for the Goat Joy Yoga Class?

I don’t do yoga. Can I just watch?

No yoga? No problem! Please sign up for a Goat Social session.  The socials are designed especially for you!  We have been told that being watched makes the yoga participants uncomfortable and that is the last thing we want.  This is all about relaxing and having fun! Goat Socials were created with non-yogi’s in mind.

Can I get a discount for several people coming together?

We keep our pricing as low as possible so that everyone can have a chance to experience Goat Joy.  We are not making huge profits. Truthfully this does not even fully cover all of the goat’s expenses.  This is just a way to supplement and share the joy of goats.

Are there refunds for classes?

Sorry, no refunds, but you can sell your ticket to a friend.  Just drop us a quick line to let us know the friend’s name to put on the list in place of yours.

How long is the class?

Each class is about an hour but you may come about 10 minutes early and stay up to 20 minutes after.  Much more than that and the goats are just exhausted. Most classes end up with the littlest goats napping on your mat anyway.

What kind of goats do you have?

Most of them are Nigerian Dwarf.  There are also some Oberhasli.  None of them have horns. All of them are 100% fun and adorable!

Do you milk the goats?

Yes! All of our goats are dairy goats first and foremost.  The ones that have kidded, we milk twice daily.  Yes, we use the milk. It is the most wonderful, sweet milk!  We make ice cream, cheese, and anything else you can think of that is made out of cow’s milk can be made with goat’s milk.  I could write a book here!  We are currently working on opening a Grade A dairy so that we can sell it and you will be able to enjoy the same delicious milk that we do!

Can we pick up the goats?

There is a specific way to handle the goats.  Please do not attempt to pick them up until you have been shown how to do it properly and safely.  Goats are ruminants and have 4 chambers to their stomachs.  Improperly picking them up could cause one of these chambers to twist and lead to very expensive and painful surgery if caught in time or a very painful death if not.  So please, do not pick them up until we have shown you the proper way.

Don’t the goats poop or pee during the class?

Well, sometimes, but it is in the grass so it becomes fertilizer.  Goat poop is just little round balls (think Raisinettes) and does not stink.  If it gets on the mat, just shake it off.  If the mat gets peed on, we have extras and will swap out.

Can I bring my dog or my goat with me to goat yoga class or to a goat social?

Absolutely not.  Goats are prey animals and are very threatened by strange dogs around them no matter how well behaved.  Another goat coming in is a concern because of our working to become a Grade A Dairy.

Do you sell goats?

Yes, once they are completely weaned, which is at about 12 weeks of age we will sell some of the goats.  All of the wethers will be available to a proper home.  Very limited numbers of does may be available.

Do you take in rescue goats or buy other goats?

No.  Because of working to become a Grade A dairy, we are careful about the animals that are brought onto our farm.